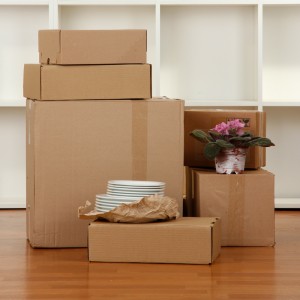 Emily announced that she was going to move back to the USA. She had been living in London with her young daughter for six years but the company she worked for was closing down their UK operation and relocating all staff to California. The timescale was tight – three months to be exact. With a dog, rabbit, daughter, garden, cars, unfinished projects and a large overcrowded, cluttered house to deal with while still working full-time, unsurprisingly Emily became more than a little overwhelmed.

In floods of tears, Emily called to tell me the news. She was not entirely unhappy with the plan to relocate, but the thought of the task ahead made her panic. Her work was fast-paced, and there was little time for her to organise her home for the move. Furthermore, it was bulging with ‘stuff’. This was not going to be the easiest of moves by any stretch of the imagination!

Naturally, I immediately offered to help. Emily had been overwhelmed for some time as most of her deceased parents’ belongings, including dozens of outfits and out-of-date medicines, had been shipped over from the United States. This clutter was added to the things she had acquired during her stay in London and it was beyond her to organise it all, while deciding what she should keep and what she could let go of.

The first thing I needed to do was to gain Emily’s trust. I knew my approach needed to be gentle, sensitive and non-judgemental but I also had to be honest, direct and firm! I started the process by pointing out that a 1973 version of the Chicago telephone directory was something she may no longer need! It didn’t take long for Emily to ‘see the light’ and in a fairly short period of time we were moving through one room after another making immediate decisions about what could go and what could not.

As we took a journey through Emily’s house, organising treasures and clutter as we went along, I was quickly able to put the essentials into their logical place, and give Emily a rationale for understanding why they should be there. I found other things that weren’t needed for day-to-day life, but which might be keepsakes or treasures. Items such as these are best organised by their meaning, so I asked Emily what was important about each of those items. Sometimes they were very important – such as toys from her childhood that she found joy in sharing with her daughter, but many others were not.

With this simple approach I organised the packing, the throwing-out, the selling and the donating while enjoying a few relaxing moments and lots of humour to keep us going. The problem with a cluttered house is that many items are buried beneath the layers of time, and we found plenty to laugh about – a 15 year-old jar of peanut butter being one of them! With a few car boot sales, daily trips to the recycling unit and tip, journeys to charity shops and auctioneers, the house began to breathe – but more importantly, so too did Emily. She felt energised and less overwhelmed and this enabled her to focus on the important task of making the smooth transition for her and her daughter to the other side of the world.

With the house ship-shape, my next task was to support Emily with her paperwork. Unopened envelopes needed attention, bank statements needed filing, utility bill payments brought up-to-date, passports and birth certificates had to be found. With a bonfire in the garden and a shredder to hand, we disposed of 20 year old bank statements, recycled a load of Chinese takeaway menus from Stockport, found the tax returns she’d been searching for, created a filing system for everything that was important and packed it all away.

After 6 weeks of long summer evenings and weekends helping Emily clutter-bust, her house was ready to put on the market. Boxes for shipping were labelled, stacked and placed in the garage and the house now looked like a home anyone could imagine themselves living in. Within a month, Emily had an excellent offer on her home, which she accepted.

Emily’s final task was to search for a house to move into in the United States, but while she busied herself with that I helped organise postal redirection, a shipping company, helped her make decisions about unfinished projects, organised the sale of her cars, liaised with her solicitor and the new owners of her home on fixtures and fittings, and finally prepared the dog and rabbit for their passage through US Customs.

Emily was not only fully prepared for her new life in the USA, but along the way she’d acquired a set of new skills to help her maintain the organisation she’d craved for so long.

This site uses Akismet to reduce spam. Learn how your comment data is processed.

Help & Advice Direct To You

Sign up to receive our latest help and advice via email.

With an abundance of common sense, sensitivity, patience, empathy, discretion and pragmatism, I am passionate about organising and decluttering. [Read More]

"Jo can assess a situation, sum up what is required, and offer an appropriate solution. The end result is a clearer house and a clearer head. Good luck!"
Kim, Pangbourne