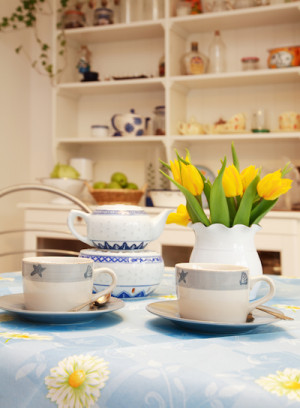 I met a friend of Kathryn’s at a local networking event and some months later Kathryn contacted Tapioca Tidy. Kathryn is a single mum with two children, studying for her nursing qualifications and also working full time. Life for her felt like she was swimming against a tide; with the breakdown of her marriage and loss of her mother, things began to take over.

I arranged with Kathryn to work with her on three consecutive Sundays, focussing on decluttering the kitchen and hallway on the first Sunday. We agreed for a car load to be taken to the charity shop and community project shop and identified eighteen unmatched tupperware lids for recycling and several unwanted chutneys from Christmases gone by. We’ve organised the kitchen to create more space and eliminated the clambering exercises that took place as part of the breakfast challenge. The early morning routine would now be less stressful.

The next two Sundays we focused on the dining room with the aim of being able to reclaim her dining table for Christmas Day. The dining room acts as a study too so we organised a space for her study material and put a filing system back in place for household bills, all important documents, school reports and employment/tax office documents.

Kathryn now has her space to study and by tackling the filing, household income and expenditure has been identified and under control.

Kathryn told a friend of her’s that she had organised for me to work with her. Her friend said that she would have helped her for free.  Kathryn told her friend that she didn’t want the embarrassment or feeling of judgement from her friend and by hiring a professional to help – this meant no judgement, opinion and complete impartiality and discretion.

With hope and energy – Kathryn can now concentrate on her exams and once they are finished we can resume decluttering the rest of the house starting with the conservatory. Step by step is the best way!

I have changed the name of my client to protect her privacy but she has agreed and is happy to share her story.

This site uses Akismet to reduce spam. Learn how your comment data is processed.

Help & Advice Direct To You

Sign up to receive our latest help and advice via email.

With an abundance of common sense, sensitivity, patience, empathy, discretion and pragmatism, I am passionate about organising and decluttering. [Read More]

"Jo can assess a situation, sum up what is required, and offer an appropriate solution. The end result is a clearer house and a clearer head. Good luck!"
Kim, Pangbourne